The municipality of Ratiboř has created a working group to build a nature trail called "Forgotten Fates" focusing on historical events and has set itself the goal of collecting written materials, documents and photographs from the history of the municipality. We have ascertained that it is still possible to obtain these materials, which are now rare and we are concerned that they should not fall into oblivion.

We would therefore like to invite everyone to help us enrich our municipal archives with new materials from the history of our village. We will arrange to have them photographed and scanned. We are mainly interested in old photographs, written documents, newspaper clippings, awards, certificates from partisans, teaching certificates, ration cards, handwritten descriptions of village events, etc. Originals are returned.

You can send us any copies of the above materials to the following e-mail addresses:

How the Ratiboř Nature Trail Forgotten Fates came into being

The first initiator of the project to commemorate some of the events from the World War II period of our village was Bc. Ondřej Haša with his friend Roman Babica from Leskovec. Thanks to the exemplary cooperation with the Municipal Office in Ratiboř and especially his interest in expanding the knowledge about the important events of the village, work on further information panels has begun. It was agreed with the graphic designer Ing. Štěpán Janíček that all the infopanels will have a unified design following the panel of the Ludvík Hynek Military Museum.

So far, the following panels have been created 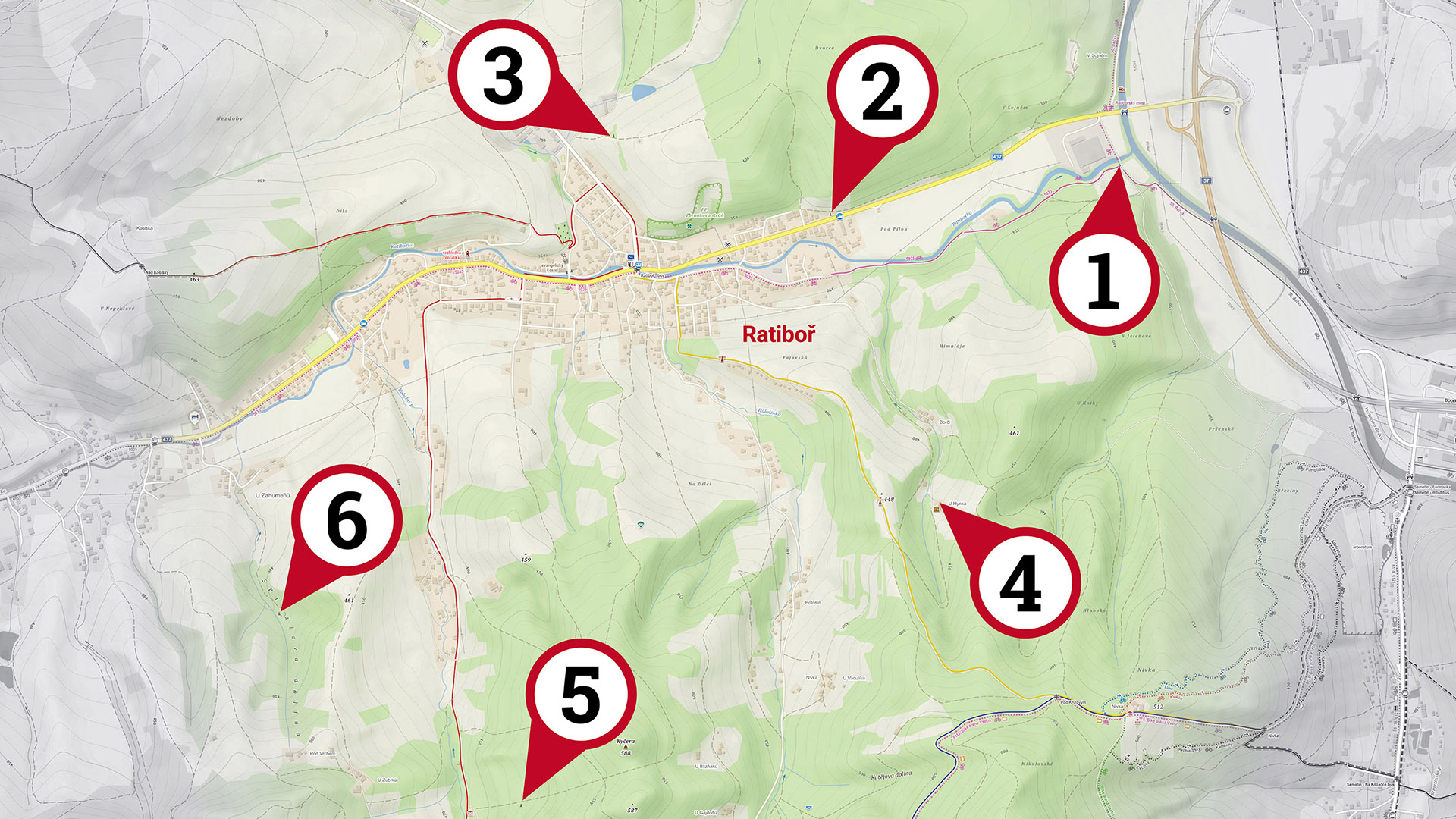 You can view the location of all panels directly on the mapy.cz website or you can download the map in a PDF file for printing from the nswebsite .ratibor.cz

Here is a short description of the progress of the work on the panels in 2019-2020. We would like to introduce our collaborators and organizations without whose help we could not imagine our work. Our thanks to all of them.

The first information panel was completed in 2019 and describes an event at the end of World War II on Zbrankov Hill, where the partisan "Boris", whose own name was Ctibor Čermák, tragically died. Shortly after the panel was placed in the landscape, a delegation from Hluboke Mašůvky (the birthplace of Ctibor Čermák) had the opportunity to see it as part of a friendly meeting between the Ratiboř and Hluboke Mašůvky primary schools, which have a long tradition.

The plaque on the monument was replaced. The original plaque was already unsightly and, moreover, it showed an inaccurate date of the partisan's death. The municipal authority also ensured the strengthening and improvement of the access road.

The cruel fate of the hostages (6)

At the same time, young researchers began to search for the site of the tragic execution of the hostages from the Vařák's Pastures on the border of Ratiboř and Hošťálková, which took place at the end of World War II.

After several futile attempts to locate the actual place of execution, the site was finally found in cooperation with Josef Machala from Ratibor. Then came the painstaking work of obtaining written documents about the event. Consideration was given as to how to mark the site in a dignified manner so that it would become a memorial and reminder of the cruelty of the war. Near the information panel in the woods above the stream, the graves of the executed were marked with wooden crosses. A memorial stone was installed next to the panel. The primary task, however, was to make the site accessible and improve the surroundings. Mr Ladislav Vojtek and his two sons were very instrumental in making the site accessible. They cut down the bushes and trees, which were mostly chipped. The memorial stone was brought from the quarry in Hošťálková and the delivery was provided by the Hošťálková municipality. We were then pleasantly surprised by the extraordinary interest of the volunteer workers, who took care of finishing the landscaping around the memorial site, burying the crosses and placing the information panel.

In the mutual cooperation of the Ratibor and Hošťálková municipalities, it was agreed to divide the tasks to ensure the unveiling of the memorial stone and the commemoration of this tragic event.

Thanks also to all the workers who helped in the preparation of the memorial site on 7 September 2019.

In cooperation with the Evangelical Church of Czech Brethren in Ratiboř, we have started work on a panel about the important preacher Jan Maniš. The text part has been prepared by the FS CCE in Ratiboř. Cooperation with the National Archives in Prague was established and the right to publish a copy of the Toleration Patent was obtained.

The infopanel was supplemented by a drawing of a possible form of the Jan Maniš house by Mgr. Igor Haša.

This panel presents new and essential facts about the name of the fallen Capt. Viktor Grekovsky - Shevtsov, which now reads kpt. Vitaly Fedorovich Grikovsky. And new information about his fallen aide Pavel Pimenov is also beginning to be examined. If further new information about Lt. Pavel Pimenov, it will be necessary to change the existing plaque on the monument and to include the real names of the fallen Russian partisans.

Not far from the homestead of Ludvík Hynek, in the entrance to his pasture, a panel was installed which describes the turbulent fate of the pastoralist family of Ludvík Hynek during World War II. Researchers have drawn knowledge not only from members of the Hynek family, but also from archives and documents that have survived from the period of World War II. The Military Museum in the Ludvík Hynek House is also an important place that illustrates the importance of the family's resistance activities.

A panel describing an event 700 years ago, when a monastery could be built in the area of our village. The seemingly simple plan, which drew on history, was consulted with many experts, especially in the field of historical sciences and archives. All of the following have provided valuable advice and recommendations, for which they are to be thanked. The surroundings of the infopanel will be complemented by a wooden sculpture of the "Royal Throne", which will hopefully be realised in the spring of 2021. The design has been drawn up by academician Dr. J. K. arch. Libor Sost'ák. We are also planning to plant a memorial lime tree here.